Climate model and effects of clouds and aerosols

How can we improve the large uncertainties of the effects of clouds and aerosols in the climate models?

The major difficulties in modeling aerosols are related to diversity and variability of aerosols themselves.

Spatial variability: the atmospheric lifetime of a “typical” aerosol particle is 7-10 days, depending on removal (e.g. rain) or how high altitudes the aerosols reach. Short lifetime compared to long-lived greenhouse gases (over 100 years for CO2) makes up for a distinct spatial pattern with high aerosol concentrations close to emission sources. Below figure shows simulated atmospheric black carbon content (“sum of black carbon in a vertical column”), with high concentrations close to tropical biomass burning regions and anthropogenic emission sources in e.g. Asia. This also means that we can not simplify models too much in terms of aerosols (for example, by having a “global average aerosol concentration”), but need to take into account distribution of aerosol sources as well as their changes in past and future. 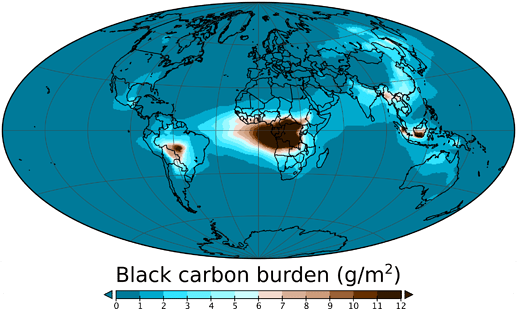 Diversity of aerosol itself: the term aerosol refers to liquid and solid particles or droplets in a surrounding gas (e.g. air). Aerosols are either released directly to the atmosphere (e.g. dust blown from desert) or they are formed in the atmosphere after chemical reactions. The range in what kind of aerosols exist in our atmosphere varies greatly: particle size ranges from a few nanometers (0.000 000 001 m) to tens of micrometers (0.000 001 m) and shape varies from round droplets to complex 3D structures in dust aerosol. Furthermore, aerosol might be composed of a variety of chemical components: sulfate, nitrate, organic matter, black carbon, sea spray etc. The combined diversity in atmospheric aerosol population induces great differences in their climate effects and again, we can not simplify the description of aerosols below a certain limit.

While aerosols might be difficult to include in climate models, so are clouds. On average, clouds cover most of the Earth surface throughout the year. Below image shows global cloud cover in October 2009, indicating somewhat more clouds over oceans than over land. Clouds have been included in climate models from early on, but even today, models tend to have some difficulties in simulating observed cloud cover exactly. A large part of known problems are related to model resolution: typical climate models operate with a spatial resolution of tens of kilometers, while cloud formation happens typically in much smaller scales. Cloud formation is also linked to aerosols: each cloud droplet is formed around an aerosol particle. Given the difficulties in aerosols (see above) and scale of cloud formation, the aerosol-cloud system poses a significant obstacle for climate models. Indeed, uncertainties in aerosol-cloud interactions and other aerosol-climate effects make a substantial uncertainty in estimating total human-induced climate forcing. 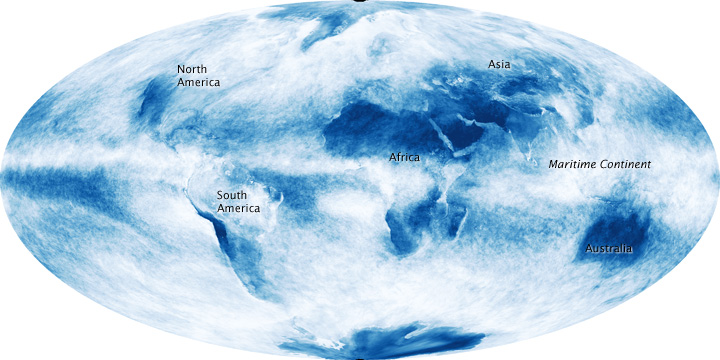 Currently, researchers are improving the description of aerosols and clouds in climate models. Available aerosol observations from satellites and ground stations are increasing, which allows for detailed evaluation of climate model performance. Emerging details on how aerosols form and influence clouds and/or climate are rapidly incorporated in models. Aerosol population can already be simulated with great detail in terms of aerosol size and composition. The remaining problem of rather poor spatial model scale (resolution) can be approached by either increasing model resolution (making the models slower) or by novel techniques such as artificial intelligence (machine learning). The description of aerosols and clouds in climate models has seen major leaps in the past 10 years, and hopefully future breakthroughs are around the corner!