What will happen to the Gulf stream as climate changes?

What will happen to the Gulf stream as climate changes? Will this affect the climate in Finland?

Traditionally the term ‘Gulf Stream’ is used to denote the strong, horizontal surface ocean current which flows near the coast of the USA, from Florida to North Carolina. According to this definition the Gulf Stream is a wind-driven current that is not substantially changing due to climate change and does not affect the climate in Finland.

However, the Atlantic Meridional Overturning Circulation (AMOC) is sometimes popularly called the Gulf Stream System and I suppose the questioner actually means the AMOC rather than the Gulf Stream. In this case, according to climate projections, it is very likely that the AMOC will somewhat weaken over the 21st century and it is very unlikely that the AMOC will undergo an abrupt transition or collapse in the 21st century. Over these timescales the projected changes of the AMOC will not substantially affect the climate in Finland.

Based on the documentary “Before The Flood” (2016), I understood Europe might get colder and the weather more extreme due to changes in the Atlantic streams. It was not presented as an unlikely scenario, as far as I remember.

Was that purely misinformation, or outdated information? Or, would the effects be significant only in Western Europe, but not in Finland?

This scenario appears to be from the interview of Piers Sellers who was a NASA scientist and astronaut, and participated in making the documentary Before the Flood. He says: “This current… the dumping of ice off Greenland could stop this conveyor belt and the Gulf Stream would slow down and stop its transport of heat from here to there and then Europe would get cold toes because there is a lot of heat transport from across the tropics, across the north Atlantic that keeps Europe warm.” (See Figure 1 for the ocean circulation system.) 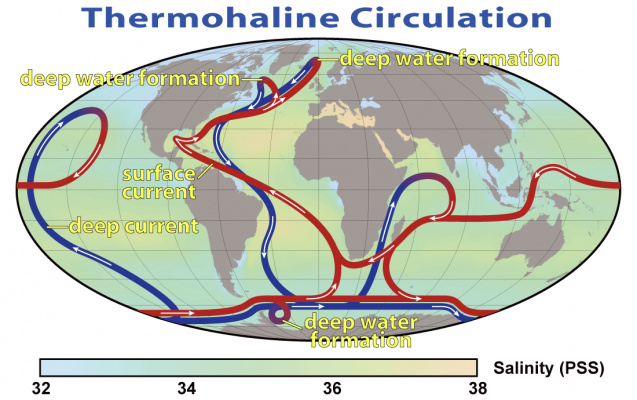 Figure 1. The global ocean circulation system, the so called Thermohaline Circulation. The circulation is driven by ocean water density and salinity differences. It is the main distribution of energy in the whole Earth ocean-climate system. AMOC/Gulf stream is the northest part of the circulation in the Atlantic Ocean.

According to the IPCC Special Report on the Ocean and Cryosphere in a Changing Climate published in 2019, this scenario is very unlikely (medium confidence) in the 21st century, although becomes by 2300 as likely as not for high emissions scenarios (RCPs), but stays very unlikely for lower emissions scenarios (medium confidence), see paragraph B.2.7 in the Summary for Policy Makers.

So in summary: The AMOC (Gulf stream) is weakening as the climate warms, and it may affect the weather patterns in Europe and North America, but full collapse of the stream is very unlikely. Could Climate Change Shut Down the Gulf Stream?

In the 2004 disaster movie “The Day After Tomorrow,", global warming accelerated the melting of polar ice, disrupting circulation in the North Atlantic Ocean and triggering violent changes in the weather. Could climate change shut down the Gulf...

Scientists Say Ocean Circulation Is Slowing. Here’s Why You Should Care.

Hotter summers in Europe, changing rainfall in the tropics, hurricane risks along the U.S. coast: If Atlantic currents keep weakening, we'll feel it.

Why is an ocean current critical to world weather losing steam? Scientists...

A conveyor belt of ocean water that loops the planet and regulates global temperatures could be heading for a tipping point. The Atlantic 'conveyor belt' and climate: 10 years of the RAPID project |...

A global project that’s been instrumental in shaping scientists’ understanding of how the oceans affect...