What are the most feasible climate engineering techniques?

What are the most feasible proposed climate engineering (or geoengineering) techniques? 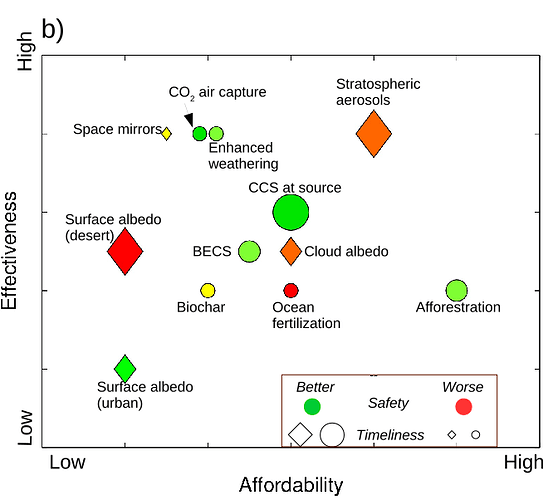 Stratospheric aerosol technique is closest to the top-right corner, which means that the technique would be cost-efficient and additionally, it would be fast to implement. Idea of this technique is to mimic large volcanic eruptions (as Pinatubo eruption year 1991), which have led to cooling in the following few years. In this technique, aerosols (e.g. sulfur) are injected to the stratosphere (~20 km altitude). In the stratosphere, there are no efficient removal mechanisms for the aerosols and thus the lifetime of the aerosols can be 1-2 years. This is much longer than aerosol lifetime lower in the atmosphere, where the lifetime is only days or weeks. Aerosols reflect incoming solar radiation back to space which would cool the climate as the radiation never reaches the surface of the Earth. The reflective aerosol blanket could be maintained by constant aerosol injections. Another way to increase the reflectivity of the Earth could be cloud brightening (called cloud albedo in the figure) which means that clouds are made more reflective. This can be done for example by spreading sea water to the air over the oceans. Sea water contains sea salt particles which can act as cloud condensation nuclei and modify clouds so that they consist of larger amounts of smaller cloud droplets which will reflect solar radiation more than larger cloud droplets.

Problem in so-called Solar radiation management techniques (SRM) (marked as diamonds in the figure), in which the two above mentioned techniques are categorized, is that those do not affect the atmospheric greenhouse gas level. Thus, these techniques are treating the symptoms of climate change rather than the cause. This means that these techniques are not affecting the other symptoms caused by increased CO2 levels, such as ocean acidification, and can lead to dangerous side effects, e.g decrease in the precipitation in some regions. This is the reason why the color of those markers is red in the figure, indicating poor safety. Another climate engineering group is called Carbon Dioxide Removal (CDR) techniques which are indicated by circles in the figure. These techniques are aiming to remove CO2 from the atmosphere and thus are tackling the root cause of climate change and are generally thought to be much safer than SRM techniques. Unfortunately, a really efficient CDR technique does not exist yet, but those techniques will eventually play a major role in the future mitigation actions together with emission reductions.